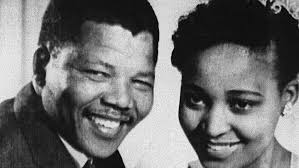 Letter from Nelson to Winnie

"Already the months you spent in detention have been a severe test for you, and when you come to the end of the case ,you will have got a deeper understanding of human nature and its frailties and what human beings can do to others once their privileged position is endangered.

When this threat emerges, all the lofty values of western democracy about which we read so much in books is brushed aside. Neither the moral standards of modern civilisation, the teachings of the Christian faith, the universal idea of the common brotherhood of men, nor pure sense of hounour will deter the privileged circles from applying the multitudinous pressures at their disposal on those who fight for human dignity.

Those who are on the front line should be willing and ready to draw the fire onto themselves, in order to inspire their colleagues and make this easier for them. In the battle of ideas the true fighter who strives to free public thinking from the social evils of his age, need never be discouraged if, at once and the same time, he is praised and condemned, honoured and degraded, acclaimed a saint and cursed as an irredeemable sinner...


...Finally , Mhlope, I d wish you to know that you are the pride of my heart, and with you by my side , I always feel I am part of an invincible force that is ready to win new worlds.

I am confident that, however dark and difficult times might seem to be now, one day you will be free and able to see the beautiful birds and lovely fields of our country, bathe in its marvellous sunshine and breathe its sweet air. you will again see the picturesque scenery of the land of Faku where your childhood was spent, and the kingdom of Ngubengcuka where the ruins of your own kraal are to be found.

I miss you badly! Tons and tons of love and a million kisses.."