The conflict between Fulani herdsmen and local farmers in the north of Nigeria is being cited now as a bigger threat to Nigeria than Boko Haram.
Whilst the conflict can be attributed to fertile land scarcity causing the Fulani to seek 'greener pastures' there appears to be very little protection for farmers whose farms are being 'invaded'. The Fulani themselves who (are well armed), state that their attacks are merely self defence or retaliation for attacks upon them, however, it's the lack of intervention from the government that is most alarming. 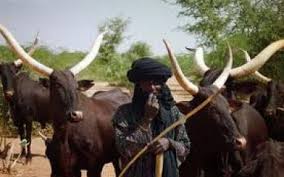 Many believe the President says little on the matter as he is of the Fulani ethnic group, and therein lies the problem.

Currently, the reporting of the story highlights `Fulani wrongdoing', yet little is known of what the story is from their side.
It's possible that they are the aggressors, after all, nomadic or not, the rights of farmland sits with the farmers. it's their livelihoods at stake

Yet without access to grazing lands what would the Fulani do? What of their livelihood?

If people attribute the Presidents lack of involvement as him favouring the Fulani, it could escalate tensions and distrust of the Fulani people as a whole.

Fulani's across West Africa are often marginalised for their successes, but it's too easy to turn a land issue, an economic issue, into an ethnic conflict.

The sooner there is a resolution, the better, for the farmers, the Fulani, and Nigeria as a whole

Violence is not the answer.