Motivators, pastors, speakers, healers etc, all have a place in society. Yet is it now fair to say that the expolitation and manipulation of African people across the African continent has reached a tipping point? How long will we sit and watch human beings almost mindlessly follow the instructions of a man (usually men) who claim to hear from god, or be a 'man of god', only for those same people to find themselves in precarious positions, broke, disheartened or spiritually lost. Ordinarily, what some pastors get up to doesn't bother me at all, as I'm a firm beleiver in adult freedom of choice, and those who follow these 'leaders' do so at their own will. However...... Increasingly, religious intolerance towards those who dare to question, have an opinion, or even show concern, can be seen in commenets, videos, and basic daily attitudes. I, along with many others, have watched, followers of some pastors do rather odd things such as 'eating grass' , drinking pastors dirty bath wateer, laying flat as a pastor steps on their backs, taken a good beating from a pastor, weve also seen the groping and rubbing of private parts male and female, and ok, do you remember the 'holy semen' shenanigans? Yes we may laugh at the time, but large swathes of communities are being lost to this mental and spiritual genocide, and that really is no laughing matter. This video - didn't make me laugh at all. In fact I found it was absolutely appaling. Now I watch popular broadcaster and vlogger Daddy Freeze from time to times time, and nothing he has said (that I have heard) warrented such a nasty, arrogant, and vile attack, especially from a so called 'man of god'. 'Daddy Freeze' 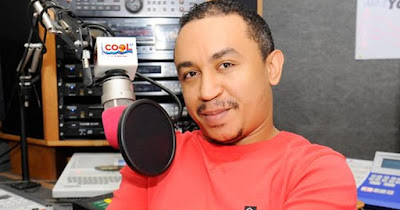 I hope in hindsight he feels ashamed, as should all the odd folk in the congregation that clapped and cheered him on. Please remember - genocides are never carried out by one perosn. But by everyday so called innocent people, who beleive they are doing the right thing. What his followers should advise him is to drop the mic when he feels the urge to talk utter crap, or at the very least, if he insists on entertaining, perhaps he could slow down somewhat when he speaks, so that he doesn't sound as though he has a thousand hot dumplings in his mouth. **
Posted by Dawna at 15:42