Whats going on with Diane Abbott?

So Chris Evans earns over £2,000.000 per year?
Nice one Chris. I didn't even realise he was still 'at it'
So the recent furore over BBC salaries seemed to stoke fire regarding the gender pay gap.
Gap?
Of course there were a few murmours about the lack of so called 'ethnic minorities' in the upper echelons of the BBC family, but not too much so you'd notice.

What stokes my fire is the blatant racism that MP Diane Abbott continues to face. The nasty emails, the ridicule, and what appears to be a media scramble to make her look as bad as possible

Feminists are far too quiet on that issue.
For them, their issue is being paid the same as men.
As honourable and as noble as that is , Diane Abbott is facing two battles, race, and gender, with not enough women speaking up on her behalf.

Diane's current 'forgetfulness' I believe has a lot to do with the subtle ( but not so subtle) bullying she endures, and if the Feminists can't find their voice on that....
Who do they hope will have ears when they too face discrimination?

I've watched many an MP, (Boris Johnson included) splutter and blag their way through an interview, but it's not taken as seriously, in some cases it's viewed as quite humorous.
They do not face the type of onslaught that Diane Abbott has had to deal with.

She is strong, yet they are privileged. 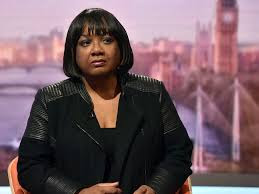 Racism and bullying.. impact.
If you or I had to deal with what Diane Abbott has to deal with on a daily basis, I dare say we'd become a bit 'forgetful' too

Shame on these so called Feminists, who only see gender in one hue.
It seems not all women are equal in the eyes of some.

Oh the not so united, united kingdom...