How Many Mistakes Will The ANC Make?

Cyril Ramaphosa has been voted the new President of the ANC and is to lead the party for the 5 years.
The great ANC
Imagine that!. 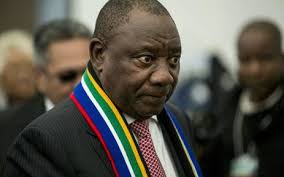 Cyril Ramaphosa may have been cleared in court of instigating the killing of the striking miners of Marikena, but his actions remain ( in my opinion) suspect.

As a member of the board of the mining company Lonmin, for him to also act as union representative was ludicrous. Cyril Ramaphosa's actions were to protect his own interests, and Cyril's interests were not the striking miners.. but Lonmin.

For Cyril Ramaphosa who is often cited as one of the richest men in Africa to be the President of the once great ANC does not sit well. The massacre alone should have ruled him out, but yet, he has been awarded the highest job in the ANC

I don't know If we have short memories or not, but the appointment of Cyril Ramaphosa is an insult to the memories of those miners who stood up for their rights and were brutally shot down

The ANC are finished.


Story of the strike leader who died for workers rights [click]