The Bullying Of MP Diane Abbott - & the Development of the A.U

The over intense scrutiny of MP Diane Abbott is well known so I don't need to go into that, but what I would say is... this is the worse picture I've ever seen of her 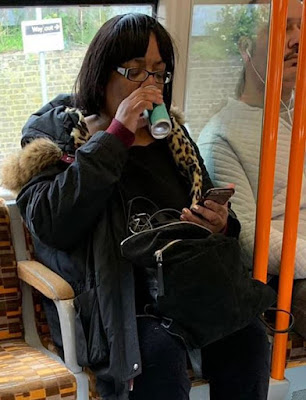 I guess it's regular street wear, but a can of beer or whatever it is, is not really a good look, not
for a woman of her calibre

'Jah Rastafari!!' tweeted Tottenham MP David Lammy, ..and I simply couldn't stop laughing - could I love David anymore right now? ( he simply doesn't give a damn does he lol)

He knows that in the face of bullying bullshit, you can only mock it, laugh at it,
I didn't know it was against the law to drink on the train, or 'prohibited' or whatever they're saying... but if these people are allowed to continue to erode the Mental Well being of this woman , certain individuals should be held accountable

No way if Diane, were White, or Gay, ( or Jewish) would this be allowed to happen.

Where are the activists??

Jah Rastafari indeed! lol
Let me tell you.... someone wrote, 'is it worth it'?...
.. and when I looked at that pic of Diane I had to wonder myself

Someone book this lady a plane ticket to the Caribbean or Africa quick... give her a break... perhaps if she's really lucky.. a new and 'more rewarding' job, better boss, good food, good music, loverman, and a little tipple of rum should she fancy it.

Anyway, as we battle with Brexit
African countries ratify the free trade area.
Gonna be tough with security such a major issue, but something to watch . It's a good start. If African countries develop further in manufacturing, they really will begin to take control of their own development