Subheading:
..How I've come to accept that culture, is often more powerful than individual desire.

Let's begin.
Back In August, Omoyele Sowore was arrested in Nigeria, for calling for a 'revolution'.
Long story short, Sowore has since been charged, but was granted bail by the court last week.
Despite that, he is still being held in detention. 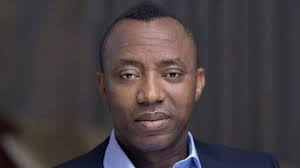 Sowore's brand of 'revolution' will not work in Nigeria.

His years outside of Nigeria, have mislead him to believe that the average Nigerian thinks as he does, and agrees demonstrably, that Nigeria needs change.

Firtsly, that he is greatly admired by people across the world, and of very senior ranking,
Secondly, he is resented, perhaps in equal measure, by many.

People with long held grudges came out of the woodwork to remark on his arrest , 'good!'... that he 'deserved it'

Sowore inadvertently became an 'outsider' with each passing year in 'the abroad.'
His mentality setting him apart further and further from the very people he's committed to fighting for.
Sowore had a cultural shift - his true revolution, cultural, but it was his and his alone to manage.

Sowore has been detained from his wife and children, for a cause that in reality, is not yet a cause.
...and in some ways may arguably be, no longer his to fight..

Question is.... what will Sowore, do next?