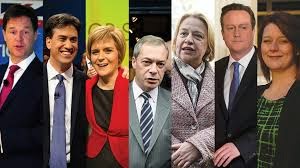 IMO, I think it was Scotland's 1st Minister Nicola Sturgen who was the star of the show last night.
She's Impressive.

Natalie Bennett; Leader of the Green Party seems to still be recovering from her unfortunate 'brain freeze incident'. ( heck.. that happens to me all the time... errm.. wos my name again..hee hee) She seemed a little tense.. nervous even. Still, hopefully she can put that incident behind her now.
Come on.. Natalie.. we're rooting for ya..
She means well

Nigel Farage lost it by constantly going on about cuts to Foreign aid and immigration blah blah. Nick Clegg offered him the fatal blow when he said.. 'I don't see how making the poor on the other side of the world poorer still is going to help us ( or something like that)

Nice one Nick.. I don't think i've ever said that before. Well not often anyway 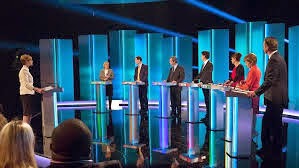 Ed Miliband; leader of the Labour Party looked surprisingly at ease. He's still a bit too nice to his main opponent though. Speaking of which...
David Cameron took every chance he got to appeal to the British public.. looking down the camera lens as if he would climb through the screen at any moment and sit next to me..to say.. 'So .. Dawna, can I rely on your vote..?
Yikes