Imagine...If Bob Marley and the Wailers had lived in Nigeria, would they have ben targetted for their dreads alone?.. if so, the world may have been denied the wonders of their music. In 2020, where dreads are now common-place...Imagine, a country with so much potential, reverting to such negative archaic views of what a person should look like.. or face judgement. FYI....Wearing dreads is just one of the things that a SARS officer would target about an individual... not in the year 1970+.. not the early days of rastafari, garveyism, or anti colonialism no.. but in modern day 2020. Imagine the potential that is being denied everyday.. 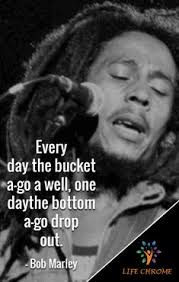 The people of Nigeria have had enough of police brutality, corruption, economic hardship, insecurity and impunity. They want to be treated as human beings. We ( our ancestors) know what it's like to be a slave in another man's land. Now Nigerians have come to the realization that they have technically been enslaved ..... on thier own soil. and ... enough is enough. The meaning of the proverb Bob sang so beutifully is just that. They have said enough. They cannot take anymore. 'Every day bucket go a well...... one day the bottom mus' drop out'
Posted by Dawna at 19:48