It has been suggested that Ed Miliband is too 'Geeky' to run the country, and as a result... never will.
It's possible.

I know it's early, but I think we will have a 'full' Conservative government come next year.
No Coalition.
The Lib Dems are pretty much dead in the water...aside from thier 'one saving grace'
The 'saving grace' who refuses to chew on the neck carcus of his comrade. Instead.. he sits ...and waits.


The eyes have it... hmmm yum yum...stealthy 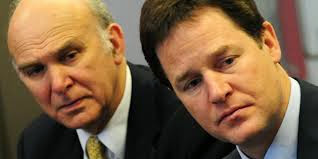 I guess he knows that, ' he who wields the sword... rarely wears the crown'.

But Vince Cable needs to remember that he's not exactly a 'spring chicken'. Not being ageist or anything, but he is ( relatively) owl. That's how Caribbean people say it sometimes when we not being ageist.
He's 'owl'.
If you're Jamaican you may say... howl.
Anyway, linguistics aside, the man is frustrating.

I like him so much that if I saw him on the street, I'd get off a bus to greet him. But he's starting to look weak and wimpish to me... darn it.
So anyway... forget the Libdems.

Labour?
Ed Miliband strayed long ago into un-electable Neil Kinnock territory, and seems to be loving it. . Only, people don't seem to have the affection for him, as they did for Neil.

Neil Kinnock sunk his ship the day he delivered his infamous "we're alright"... "we're alright". - pause - "alright" ...speech.
Losing consecutive elections didn't help Mr Kinnock, neither did tripping over his own feet on the beach, and practically dragging his wife down with him.
But that day on the stage.. he could just as well have have well have approached the podium, and in his finest Jamaican accent screamed.. bumboclartttttttttttttttttttttttt !

That's how well it went down.

The mainstream media are having a field day with him right now. Apparently he even eats a bacon sandwich like a prat.
No comment from me. That he's even eating bacon ... oh never mind

What is the UK coming to when a man can't even eat a sandwich in peace... 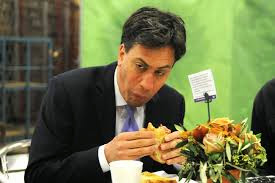 The Labour Party are beginning to strike me as a bunch of cowards. They all know Ed hasn't got what it takes to really raise the profile of the party.. but will they do anything about it..
will they heck.

So perhaps they deserve to lose.

To be fair I like Geeks. Geeks and Introverts.
Introverts are underrated.
But let's face it...extrovert Geeks can be annoying.
I have my Geek moments for sure. Geeks are cool.. Geeks rule..

But aint no Geek gonna win the next UK general election.
Mark my words.

Memories,
Light the corners of my mind
Misty water-colored memories
Of the way we were
Scattered pictures,
Of the smiles we left behind
Smiles we gave to one another
For the way we were
Can it be that it was all so simple then?
Or has time re-written every line?
If we had the chance to do it all again
Tell me, would we? Could we?

Lyrics by B Streisand

Yeah... I know...I am silly sometimes heehee. that'll be the Geek in me