Weekend Wow Factor pt 1 - To Hide or reveal your Identity.. That is the question..

Quote - 'Emily Thornberry has resigned from Labour's front bench after sending a tweet during the Rochester and Strood by-election which was branded "snobby".' Full article [click] 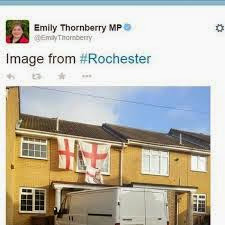 So, she was forced to resign from the Labour front bench huh....
Seriously...why?
Funnily enough, there are a few houses near me that look similar, with a couple of flags drapped outside windows. I tend to associate that look with football these days. To be honest, the flags went up during the World Cup and just never came down!.. There were a few 'country flags' up during the world cup and it was fun trying to identify them.

I remember once many years back doing some outreach on a housing estate in Harlesden. It was a huge estate, and we were posting leaflets. I came across a door ( and walls) that were painted blood red. There was the biggest swastika on the door. It was black. But there was more than one. On the walls around it, and daubed on the door was Nazi regalia.. swastika's all over the place!. I felt sick , but mostly scared. Was that a sign of identity ?.. or mental illness.?
I fear the latter.
We made a swift gettaway.
Anyway.. that was an extreme example. In the case of the house in Rochester, I think the Labour Party's over sensitively has exposed them ..yet again.. it's pathetic.

Let people fly thier bloody flag/s if they want. It doesn't necessarily mean those who live there are a bunch of white racists. I guess the particular house that was tweeted was abit of a stereotype.. You know... white van man.. St Georges Flag.. and to add to that mix..a bloody West Ham fan. ( now that last one is troubling lol!) .. but wouldn't it have been funny of the owner of these symbolic references to white Identity, was actually Black?!
I went out with a guy who was a major West Ham fan. Turned out he was a complete dick.. Yeah he was Black ( but White) so perhaps that was my warning sign! ..who knew.

Anyway. Once again Britain struggles with Identity.
Hey.. it must be tough being White and British right now.

I have a Koran.
I was bored with 'Christianity' and did think once about making a smooth transition.
It's an English Translation, and I bought it many years ago. I've read a little, but no where as much as I've read the Bible.
Having said that.. I would have been screwed if I was on that bus in Kenya... [click]
I can only really read fully in English 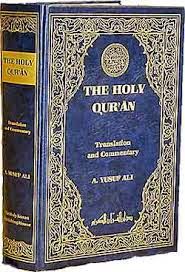 That's like me walking up to a bus load of people and saying right.. sing me 3 Luciano songs or you're dead!
Or - name me one of Sizzla's greatest hits.. and for good measure.. who produced his first album?.. don't know?.. oh well.. guess your life is over
Play fair.
Extremists rule by fear.. but you don't win hearts .. or minds.. that way.
Not in the long run
#truetalk

For the second time this week Kenya has made my blog posts.. and not in a good way.
I have some Kenyan readers I think.. so...someone please please please - share something about Kenya that doesn't debase the people and the country.
Do I have really have to go back to the independence revolutionaries to find a hero?
Bullshit.
Posted by Dawna at 10:32