Buhari Presents His 2019 Budget and The Crowd Boo.

What a drama!
Can you believe the unruly behaviour of these senators?
Not even the prayers, both muslim and christian, were respected, much less the President
'Freedom come by struggle by struggle.. Freedom come..' some sang

In truth , are these senators really struggling?
Most are overweight despite saying they're hungry, and the allowances they receive on top of their salaries are really very generous.[click]

As Buhari completed his address and sat back, I wondered what he could be thinking... as the jeers and disarray continued. 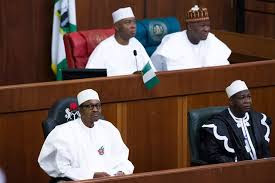 In an attempt to scold these unruly fellows, Buhari told them to remember the world is watching.. and that they are supposed to be above that

Lie... no.. it's not true' someone shouted
I had to laugh out loud at that one
Funny stuff.

There are people who blame the state of the nation on Buhari... yet you really have to wonder..
If these are the men in control of their respect states.... can they really be trusted to act with maturity, dignity, and integrity?

They are practically uncontrollable.
Perhaps it was just down to the excitement of being in the presence of the President, however... it certainly wasn't boring!.
It's a tough job indeed. who would really want it?

You have to hand it to him. Like him or not....there is something about Buhari.
Pretty cool, in the midst of a carnival.... 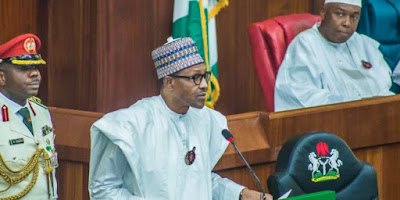