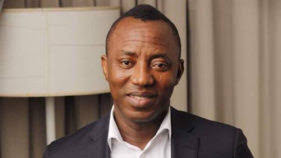 Born 16th February 1971, Omoyele Sowore was born into a polygamous family of 16 siblings.
Raised in Ondo state, Omoyele attended the University of Lagos.

A one time student union activist, Omoyele fought against cultism and corruption, and was also active in the struggle for democracy from military rule

In 2006 Omoyele started Sahara Reporters in a small room, from the United States, with the intention of exposing corrupt officials and government malpractice.

Sahara Reporters has been a powerhouse of African Journalism and reporting, but Omoyele has raised the bar even further, by announcing his intention to is run for president of Nigeria in February this year, and by August, formed and registered his own party; AAC .

The African Action Congress was recently excluded from the recent Presidential debates, despite its growing prominence across the county.

Omoyele is a force to be reckoned with, and no matter what happens , this is one of the most impressive displays of vision, integrity, and action seen for some time.

This interview has done the rounds, and many have been taken aback with the ease in which his is both outspoken and factual.

Like Fela before him, it was his time spent outside of Nigeria, notably in the US, that strengthened his awareness and resolve, and gave him the kind of clarity and insight that sets men apart

Humble, hardworking, 'fearless' and handsome, Omoyele has the ability to communicate well with people across ethnic lines, nationally and internationally... and has a sense of humour despite the seriousness of his ambitions

One of the problems he faces is what's known as 'stomach infrastructure'.
It has become a staple of political activity and vote rigging. 'Stomach infractstuture' is where people will vote for whoever pays them. It's not exclusive to Nigeria, no, we have seen instances of political vote buying across the continent, with votes going for as little as a bag of rice.

I've seen the disappointed faces as he's toured various states, and not handed out 'favours'.

72% of eligible voters didn't vote in 2015, over 59% of adults in Nigeria are illiterate, so the struggle is that the ability to tap into the amidst of people who will not be reading lengthy manifestos, and are accustomed to short term gains of small amounts of money.. is no easy task.

There is a change on the horizon win or lose.
Omoyele has raised over $100.000 on gofundme, still not much compared to the dominant parties, however, there is still time.

The questions are, do Nigerians deserve an Omoyele?.. are they ready?.
Does the average man or woman really want change, or even believe it possible?

Despite the increase in social and economic inequality, there are many who would like things to remain as they are, as the status quo benefits many.
But Omoyele is cut from a different cloth.
Integrity may not be the norm in political life , but it's certainly something to aspire to
It helped Buhari win against Jonathan... now....can Omoyele, as the 'ranked outsider'....unseat the formidable Buhari?
We shall see.... yes, we shall see..