Is the DRC To Rich For Peace?

Elections are scheduled to take place in the DRC this weekend. It's possible they'll be delayed again.
Kabila may want to hold on to power, but with protests against his stronghold, Ebola, and the ongoing war in the East, I'm not entirely sure why he would want to.
He did agree to set down after his second term.....
So what's up? 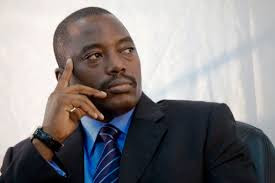 Perhaps he's being aided by neighbours Uganda and Rwanda, as the country remains an international honeypot

But a country is not family inheritance
Or is it?...
England..... heehee.

Kabila's second term actually ended two years ago.. but a tweak in the constitution, has seen him remain as President.

I'm not sure who could possibly take over, or for that matter, what changes for the better can be made.. it's a quagmire...
and he world is not hungry for it.

Why is the DRC so easy to forget?
Is the country simply too rich for peace?
Posted by Dawna at 21:33