I've never really given much thought to the debate around reparations.

Anyway, I was watching Oshay Duke Jackson's Channel and came across this debate, which sparked my interest.

There are some interesting views on display ( funny in parts) but what's most interesting perhaps is the conflicting views, which are food for thought.
If you're easily offended, probably pass on this one - the language used in places may put some off ,but if you can look beyond that, and have an open mindset it's actually worth a listen

I'm still on the fence with this one, as it's a complex issue, made more complex when you consider that many say that there were African leaders at the time who were also culpable. What is the African Unions opinion on this?

However, as compensation has been paid to holocaust survivors and their families at approximately $560 million and rising, and given that compensation was paid to slave /plaintation owners for 'loss of earnings' at the end of the trade, it's not surprising that many feel the same consideration should be made to African survivors of what was a most terrible time in our history also, the effects of which remain today.

Ok well... you might want to grab your popcorn for this one, it escalates quickly.....didn't see it coming.. funny as heck :) Watch [here]

I watched the 1st 2 episodes of the series Africa with Ade Adepitan last night, and it's a really great watch
I've a lot of respect for the tenacity of this man, it's fascinating to watch. It's on BBC2 Sundays. 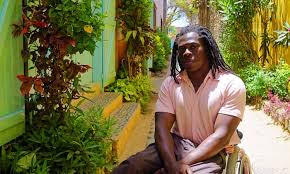 
The west’s wealth is based on slavery. Reparations should be paid - Kehinde Andrews