Yet 'Bottom Power'.. in a curious definition, amounts to a form of prostitution. ( an extreme summary perhaps, but hear me out)
If a woman uses sex/her body/ sexuality to obtain favours from men, what definition would you give it?
Some would say 'smart'.. but lets be serious for a moment :) 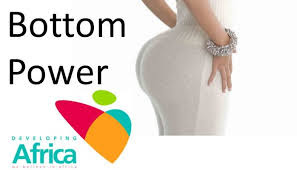 Could Patriacrhy and African feminism work hand in hand?. After all, A woman given equal rights, dignity, and treated fairly in society is ultimately.. one happy and contented woman.

And a happy woman = a happy man. Period.

No?
Ok, but as a woman who was raised in a patriarchal but 'fair-ish' home, with more males than females, I can honestly say I'm not sure what the problem is with regards to female empowerment.

My own father raised me to believe in myself and not to consider myself less than anyone.. and to be honest, gender was rarely mentioned.
There were clear lines of delineation in the home with regards to roles, but it worked well.

Whilst the term Feminism may be a European exported construct.. African Feminism concerns itself with looking at the difficulties many women on the continent face for no other reason other than the fact that they are women. African Feminism therefore, trys to raise awareness of those issues and address them.

Or should we turn a blind eye to war rapes, domestic violence, FGM, child marriages and little or no access to education for those poorest women in society?
If So... why?

Besides, I can think of many other European/Western or'foreign' exports that many African societies are quite happy to embrace.
Chinese labour being one.
I wont mention European religious symbols. I try not to get too hooked on labels, but as far as I'm aware, and contrary to popular belief, African feminism is not about hating men, wanting to be men, or even taking away the power they feel they have. It's simply about recognising the humanity that exists within women, in your counterpart, and acting accordingly.

Something that has come to my attention however, is that vast numbers of women on the continent don't seem concerned about it at all. They may have the occasional moan to their girlfriends, but in the main, appear fairly content within their patriarchal structures, with more attention paid to new hair, clothes, and all the other trinkets we women often tend to love.
In fact, those who speak the loudest on 'African Feminism', appear to be women in the Diaspora.
..and are often single ladies (not sure if there's a correlation)
So.. my questions are...

Why are the women on the continent so silent?..
and... If they are not concerned... should we really be?


To be fair I think I can understand ( a little) why so many black/African men are against it. Perhaps they feel it's synonymous with rude, lewd or out of control behaviour, preferring therefore to suppress it before it gets out of hand :)
but do they really feel that behaviour is inherent in all women?
A girl child?
Hmmmm

Music time :)
as I'm love with this song at the moment...