Transitions of Power - ft music from Randy Valentine; You & I 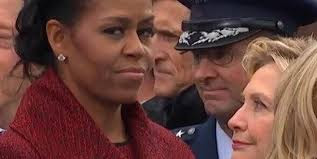 Wonderful pictures abound after such a historic day.
President Obama handed over power to President Trump... and President Yahya held on to power, way past his deadline despite ECOWAS Troops ( Economic Community of West African States) deployed to remove him forcibly if required.
No scaring that ex military man
Still, there was/is little choice, Barrow has been sworn in at a momentous ceremony in Senegal, and Yahya's cabinet has resigned.
Sorry to him him go that way but him time in power.. is up.

Yes, It was an Interesting day in world affairs.

Seriously though.. just what (or who) was Bill looking at so intently.. yawn

Hilary's look said it all.

**
So, a day past his deadline and Yahya Jammeh finally agrees to leave, and will accept refuge in Guinea

Power transitions. How is it possible, some may ask, that a country who voted for Barack Obama could turn around 8 yrs later and vote for Trump?
Easily.
...and I wish America well.
At least the police didn't shoot any protestors yesterday despite them smashing windows and going on a wild rampage...
...I wonder why?

Jammeh must be feeling quite rejected...
Here's a song sir