With the most recent peace agreement called off, is it right to extend Salvir Kiir's presidency by 3yrs? [click]
There will be no 'democratic' elections in June, and my question is..if not then... when?.

If the reason for the postponement is fighting and instability..
...and one possible solution is to give people the chance to vote for thier leader... 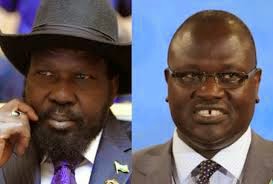 Why not have the vote.
They may argue that to do so, could put even more lives at risk and increase the intensity of the fighting...
But they have broken every ceasefire agreement anyway.[click]

To be honest I'm not convinced that either man should be in power.
Neither should be content with the current situation, and war being conducted in their names.
...That they are unable ( or unwilling) to curb the violence is a worrying sign. It's irresponsible

To be a leader when war rages on in your lands is a real test of your power and influence over your people.. not to mention your ethics, morals and values