Weekend WOW Factor - Is Sierra Leone about to enter into another crisis?

'All of life is politics
None shall escape its clutches'

The news of the Vice President Alhaji Sam Sumana's self quarantine after it emerged that one of his body guards had sadly died from Ebola, was a troubling development for a country that was seemingly breaking the back of the disease. A disease which is even harder to treat and overcome, for those poorest in the land..

However, it was last weeks news of his sacking from the ruling party which caused even greater dismay.
I'm sure many would ask, 'What could the Vice President have done to warrant such a seemingly callous and ill timed expulsion?. Surely a man in quarantine would rather receive prayers and best wishes, and not the sack. 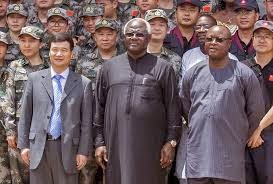 Reported reasons for his dismissal include, lying about his religion, his educational achievements, and being a chief instigator of civil unrest in his native Kono district.
Perhaps the most telling accusation lies in the claims that he was setting up his own political party to challenge the APC.
It must be re-stated however, that these remain allegations, and are yet to be proven 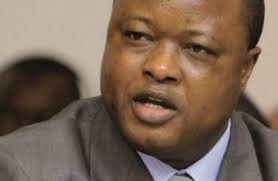 There are others who will claim the allegations are untrue and a malicious attempt to get rid of a popular influential, and potentially powerful man.
Wherever the truth rests, I fear it will never be found.
At least - not yet.
Like many African countries who have struggled with post colonial independence, transparency has proved to be a difficult beast to capture.
So has trust.
A residue of fear, and a culture of corruption has plagued these countries, and will continue to do so. Countries that ironically, have been a bread-basket, and great supplier of wealth to and for multinationals.

The latest twist to this tale is that the Vice President has fled his home, is in hiding, and is now seeking US asylum, after his home was reportedly stormed by the military, who unarmed his security on Saturday morning ( yesterday) . [click]

This is a messy affair.
One which if those involved are not careful, appears to be fanning the flames of discontent across the entire country.

From the outside looking in , the expulsion of the VP would appear to be misjudged. Many will have sympathy for a man who appears to be very popular among the people, and by all accounts, has been kicked - when down.
But for others, his expulsion may make perfect sense, and be seen as excellent timing.

I will say this.
Good looks, charm and popularity do not fix roads, provide 24 hr electricity, or create jobs.
They do not build homes, hospitals, schools, or educate the masses. They do not guarantee a fairer distribution of wealth, end corruption and international mineral exploitation, end FGM or support women's rights.
Values will.
Both men have been at the forefront of politics in Sierra Leone for some time, yet when Ebola came knocking , it revealed gaping holes in services, that shocked many. In other words, things fell apart.

When will our African leaders learn to stop fighting each other, and pour thier energy into re-building thier countries?. 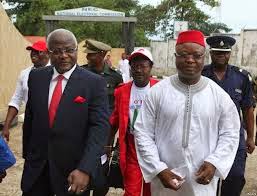 It's absolutely crazy.
Whoever the next President or Vice President will be is of little consequence.. if it's business as usual.
Better an ugly man (or woman), with a real commitment to helping the country than a sweet talking handsome rich charmer, who will do little or nothing to help those who need it most.

Sierra Leone is either at the brink of complete triumph, or utter despair.

* Hope the VP is safe and well

btw - Where's the opposition in all this.. and how come they so quiet?

I hope they resolve thier differences
Posted by Dawna at 14:37