I think it's just great. Such a simple yet effective act.
I made mention of it once when walking along what could be a very beautiful beach. Beautiful but for the rubbish strewn along the beach by residents.

So I'm very glad the new president is galvanising people to tale pride in where they live, and showing them that they too can make a difference
The need for hygiene and cleanliness was highlighted greatly during the days weeks and months of the spread of Ebola
President Bio has started well.
The kind of Leadership that Nigeria had hoped for perhaps...
It's wonderful to see the people working together like this

The Windrush Scandal really put into focus the ideas of nationhood, home and belonging
Many Caribbean's do consider the UK as home, but when they travel 'back's the Caribbean, they say they're going 'back home'
Freedom of movement is what they deserve. The rights to dual nationality, and as a result freedom of movement between home and 'home'.
Our windrush elders have done their bit for the country, more than enough, and we are grateful for their contributions. But the UK can never really be their home. 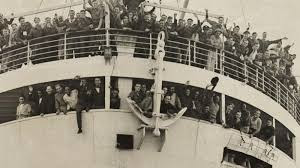 In fact, the Caribbean wasn't their 'home' either, they were taken there by force. Imagine that, twice removed from their country of origin, yet the UK who benefitted greatly from slavery and the labour of these individuals after the war, have the cheek to send some back.
Repatriating people on the sly. Without reparations.
How could those people really have been denied passports?, considering some served in the British army, it really is appalling,
Ha!

When you love foreign but foreign no love you...