President Buhari took the oath of office at his 2019 inauguration, and most surprisingly, did not deliver an inaugural speech!
Nothing

Unike President Ramaphosa recently in South Africa, there were no rousing words of a better country, nothing to rally behind, no thanks, no words of encouragement, nothing.

Despite the pretty uniforms on display, it really felt non celebratory in many ways,and lacking the attendance list one may expect for an inauguration.

Could it be because his Presidency is being challenged in court?

Whatever the reason, the speech was missing.

President Buhari looks and sounds like man man who is tired of his people.
In his recent NTA interview, much of what he said was that the people he presides over, lack discipline and self responsibility ( if you read between the lines)
Like a father who throws his hands in the air and despairs at his unruly children, the President's message really is, those who know better do better - and he cannot be expected to be In all places at all times - watching over the decisions individuals may make, and correcting them every step of the way.

The President's body language comes across as 'these people are heathens...and are beneath me'.

President Buhari's morals and values matter to him, and as he is now presiding over a democracy, he cannot enforce his beliefs or values, on anyone.
A question people should ask is , did he perform better as a military leader?, and if so , why? 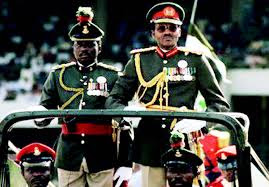 President Buhari appears to be giving the people what he beleieves they deserve, based on how he perceives their behaviour.

I could be wrong of course, but the President looks as though he has fallen out of love with the people he is there to serve.
The question is - is he right?
Or should he, as a leader, still speak to his children and continue to guide and lead them - no matter how disappointed he may be.