Corruption is eating Africa, and with China's on-going investment and loans, there appears to be little incentive to tackle the money lost to corruption which could be used for local development and services for the people.

China's pledged $60billion investment across Africa is a potentially troubling debt trap that may see Africa lose control of the independence they fought so hard for.

Zambia's recent default on some loans has seen them lose control of their major broadcasting company, and despite being told there are no strings attached to these recent loans, it is hugely unlikely that this is 'free money'
If you consider the amount of money stollen from national budgets, it begs to reason that without high levels of corruption there would be little need for such heavy borrowing.
China benefits from Africa's corruption and lack of stability.

So, as leaders continue to siphon money for themselves and their families, or fail to tackle those who do, the majority citizens will be left to feel the impact
Local people are yet to be skilled up or employed in the new developments and as a result will watch as spectators unable to participate.
It does not appear that African leaders are insisting on the contractual inclusion of local people with regards to employment, and most developments therefore are staffed by Chinese workers.

Yet we can we blame china? . they have spotted an opportunity on the ground. If or leaders despite years of independence fail to spot them, what can we say. 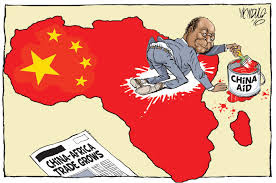 It's an emerging situation, an interesting one at that. Politically, citizens across Africa are tired with the status quo leadership. What would happen if emerging new leaders on full analysis of these deals discover and decide they are weighed heavily again them, and simply refuse to pay?.
If leaders are serious about eradicating poverty and investing in new developments they would start from within and tackle the money lost to corruption.
They would not wait on Chinas investment.
It's certainly a carrot and stick situation, with China pleading to wipe out debt for poorer countries, and the promise of wonderful new developments, therefore it's not hard to see the lure. But it wouldn't be the 1st time Africa payed a heavy price for shiny new things.